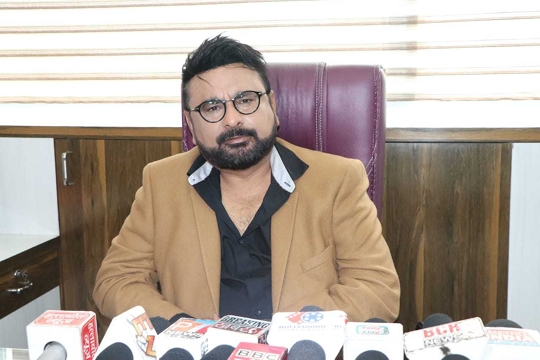 He began his entertainment career as an Assistant & Production executive. Later on he realised his strength that he is very good in management then he started his career as a Celebrity Manager in 1999 and todays he is one of the most prominent and successful people within the Industry.

Octave Entertainment is coming up with multiple projects but amongst them the few most talked about shows is their project “REWIND”. This show earlier performed in 2019, which had a total of 15 shows and was done in South Africa, Dubai, USA, Canada. The latest Rewind project was in Australia couple of months back and both shows were completely sold out making it a huge success .

The Show now will commence from 17th June 2022 in USA, Canada having one of the best feedback and responses. All the Legendary Artists like Kumar Sanu, Alka, Udit Narayan with 35 singers will perform on the best-to-best songs of the 90′ s , Indians and NRI’s even foreigners are crazy about the Bollywood evergreen songs which we have witnessed in the past making the earlier shows super successful all over the cities so far, Neeraj Mishra’s Octave Entertainment is managing Alka, Kumar Sanu. This show’s preparation has already from 2020 facing many difficulties due to covid but finally is now on 17th June 2022.

On Speaking with Neeraj Mishra he says he is very excited about the show , he hopes like always this time also they will get good response. He says they will also be performing 3 shows in London, UK as well .

With their Rewind project one more show will be shortly announced with Iconic Javed Aktar in which he will be releasing his song “Kahi mai aisa geet gaun” . where in he will not only perform in this song but will also share his experience. Talking about the future plannings Neeraj also adds about his plans of a project with the Celebrity Govinda, Madhuri Dixit, Anil Kapoor, and Ravina Tandan show’s name is “ICONIC 2”. Which they are planning to start on 6th Sept 2022.