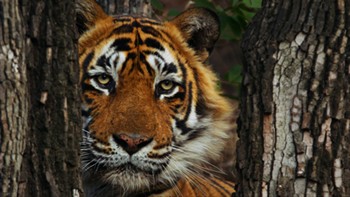 T-24, popularly called Ustad, the formerly dominant male tiger of Ranthambore died in captivity on December 28, 2022. This big cat who was known to be fearless and a “man-eater” was controversially removed from the wild in 2015 for killing at least 4 men who entered his territory. Activists largely argue that the tiger was acting in self-defense while the forest department believed he was killing humans as prey and had to be removed in the larger interest of conservation. Yet other believe that some other predator was responsible for human kills attributed to T-24.

Social media brawls, ‘Save Ustad’ billboards, the High Court, The Supreme Court and candle light marches were wall part of the uproar around this powerful specimen of the national animal of India. The tiger, 16 or 17 years old, was having several health issues in his zoo enclosure in spite of the best care, eventually succumbing to cancer. He was mourned by Indian’s from all walks of life including those who were more intimately involved with his case:

“I am grateful for the time I had with T24. He was handsome, powerful and had a cool beard but mostly I followed him in the wild for years because I liked him. Little did I know that he would become an icon for tiger conservation and die for it. His story has the power to elevate the lives of other large predators. I will always remember him as a dominant male tiger in the wild.”

“Ustad is back! Back where he belongs. After a long and weary life his bold stripes now freely roam the jungles of Ranthambhore in eternal peace. Invisible to the eyes, his spirit moves on. It can be felt. Worldly matters and sufferings left behind; it is total bliss. It’s like being a cub again! Gratitude to all who loved and cared for Ustad.”

“I tracked the T-24 saga because I am passionate about tigers and wildlife. It is saddening that the victim of man-animal conflict is a   dominant male tiger with cubs to protect who got removed from his home for killing men who invaded his territory. Ustad’s death should be an eyeopener for all of us humans. Man-animal conflict is eternal, but something needs to change with tiger conservation. Or we will soon have none left!”

“My memories of T-24 date back to 2013 when I was the park manager at Ranthambhore. He used to be the one of the most popular tigers because of his strong build. Unfortunately, he was implicated in the killing of men and was declared a danger to human life by the Chief Wildlife Warden and the Jaipur High Court. After the fourth kill I was concerned that T-24 would be shot dead or sent to a zoo with small enclosures. So, I requested the CWLW to transfer him to Sajjangarh Biological Park which was under my control and had large one-hectare enclosures. It was a massive undertaking to house a full-grown wild tiger, but he was given the highest level of care and we kept him safely for 7 years till his recent passing. Till the very end he maintained his wild side.”

“I believe that certain documentaries need to be seen on the big screen. TIGER 24 is one of them. To see exclusive footage of India’s most controversial tiger on the big screen is a treat. With T24’s recent passing I now feel even stronger about TIGER 24’s theatrical run given that he has sparked a national conversation on man-animal conflict. TIGER 24’s screenings with be a tribute to this magnificent jungle cat and his contribution to the conservation of our national animal.”

“Ustad is the one who triggered my activism for wild tigers when I saw him lose his freedom to the tag of ‘man-eater’. I began to see the plight of our wild tigers beyond the showcased tiger sightings, glorified visuals, and implied vacuous conservation efforts.”