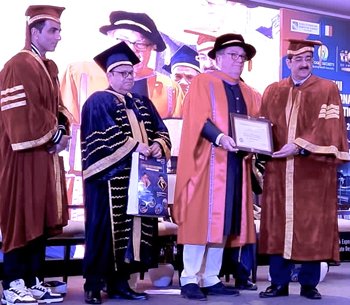 “We feel honored in recognizing the efforts of Sandeep Marwah, one of the most popular people from Asia. His contribution is Global. It is our duty to high light his sincere contribution in his field and it must be recognized by presenting Doctorate,” said Dr. Thomas Prade President Ecole Superiuere Robert de Sorbon France.

The  contribution of Sandeep Marwah also includes his mentorship to more than 20,000 students from 145 countries of the World. He is the producer of largest number of short films, founder of Noida Film City, Marwah Studios and Asian Academy of Film & Television added Dr. Vivek Choudhry Vice President of Ecole Superiuere Robert de Sorbon-the French University.

On this Occasion prestigious “Bharat Samman” award was also given to Sandeep Marwah for his untiring contribution to creative World and Social activities.